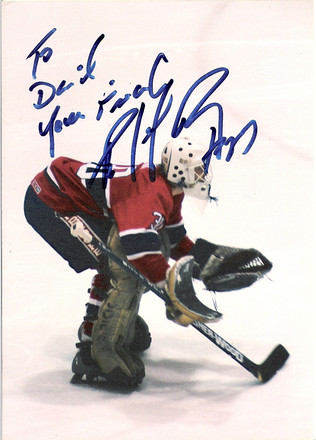 This site provides the Halifax Mooseheads with game-related images. The "Client/Player Area" is a password protected space that gives the team, players and their families access to other content. The Photo Gallery provides a selection of images for fan viewing.  Please follow me on Twitter as I provide information when images are posted online. Players and their families can obtain the site password to download full-resolution image access, where the watermarked Copyright will not appear. Just Direct Message me on Twitter or e-mail me.

I am grateful to the Mooseheads organization for the confidence they have shown me for the past 14 years in giving me the privilege to shoot the team, the players, and all the interesting things that happen in and around the rink.

One of my early hockey game shoots came in the late winter of 1984-1985. While attending university, I shot most of the AHL Fredericton Express home games - the Quebec Nordiques' farm team at the time. Among the shots I captured were images of a tall scrawny kid playing goal for the visiting Sherbrooke Canadiens. That kid was Patrick Roy, and I later discovered that particular game was the only regular season game he ever played for the Sherbrooke Canadiens (Sherbrooke won 6-4).

Roy went on to win the AHL Calder Cup that same season. The rest is history, as he led the Montreal Canadiens to the Stanley Cup in his NHL rookie season.

Many years later, Patrick Roy signed that photo for me.